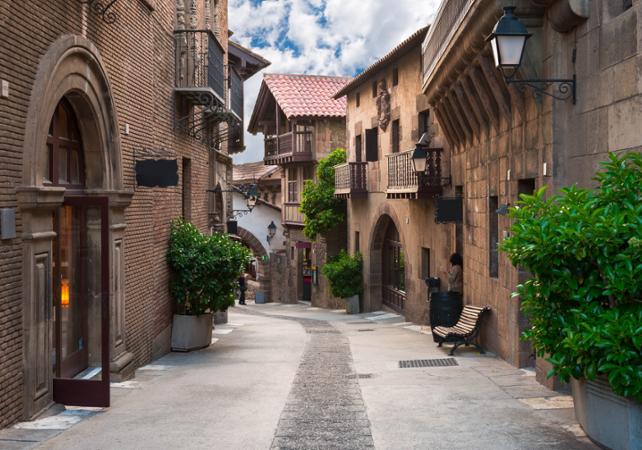 Poble Espanyol is a unique town constructed from the re-creation to scale of 117 buildings from various regions of Spain. A peaceful and pleasant walk will show you the Peninsula’s variety of architectural heritage: from an Andalusian neighbourhood to Catalan Romanesque monastic architecture.

Travelling by foot and in a few minutes from Cordoba to Besalú or from Cangas de Onís to Medinaceli via Mallorca, Santiago de Compostela, Cáceres and many other parts of the Iberian Peninsula to discover Spanish popular architecture from another point of view is possible. This is the magic of the Poble Espanyol.

A peculiar village founded in 1929

We are talking about a village built on top of a mountain, Montjuïc. And this is precisely what it is: a village. With its main square and other smaller ones ,with streets full of traditional houses of various styles of Spanish architecture: Romanesque, Gothic, Mudejar, Renaissance, Baroque… And also, gardens, fountains, medieval walls… including a monastery and a museum!

All these things are common features of most villages in Spain and they are perfectly summarized in the Poble Espanyol of Barcelona. This was exactly the goal of the creators of the precinct, built in 1929 for the Barcelona International Exposition. In total, 117 constructions which are in fact full-scale replicas of other existing ones. The resemblance is so good that in some cases, they were used as examples for the restoration of the original building.

The architect Puig i Cadafalch came up with the original idea and his colleagues Francesc Folguera and Ramón Reventós materialized it with the help of the art critic Miquel Utrillo and the painter Xavier Nogués, who travelled to 1.600 towns in the whole península, taking notes and drawing in order to capture the real essence of Spanish architecture. An essence which cannot be transmitted through big monuments but more through popular buildings, small parishes or enchanting little squares, the result of many centuries of history. The project had so much success that the government of the time decided to keep the precinct for the future generations.

Poble Espanyol is much more than a decoration inspired by Spanish architecture. Its constructions are full of life and are the perfect surroundings for cultural activities that you can’t help but enjoy. For example, the Museo Fran Daurel [Fran Daurel Museum], which has
a rich collection of contemporary art where you can admire pieces by Picasso, Dalí, Miró, Tàpies, Chillida or Barcelò.

The modernity of these artists lives in harmony with the tradition
of Spanish architecture from previous centuries. In addition, Poble Espanyol hosts dozens of crafts workshops which make unique creations in leather, ceramics, metal, glass or wool, among many other materials, Because of this, our space has been declared an area of interest for artisan crafts by the Generalitat de Catalunya [Catalan Regional Government].
As if this wasn’t enough, the streets of Poble Espanyol are full of bars, shops, restaurants and many other establishments that offer a rich commercial and leisure experience, just like an authentic Spanish town! So as to not miss any details of the constructions that form part of Poble Espanyol, below you will find a complete directory.

Visit the links below: 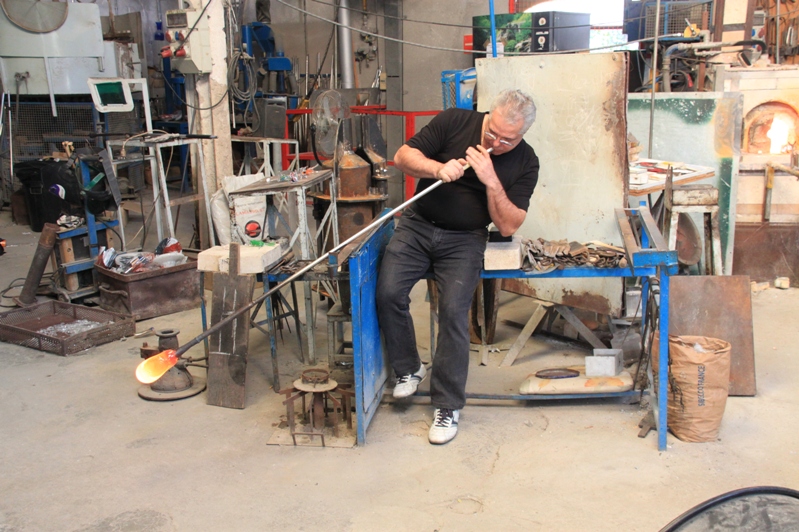 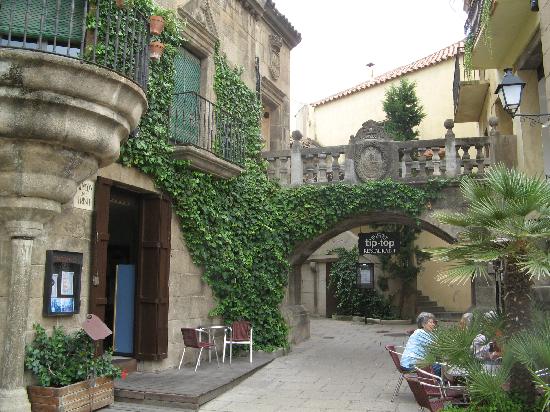 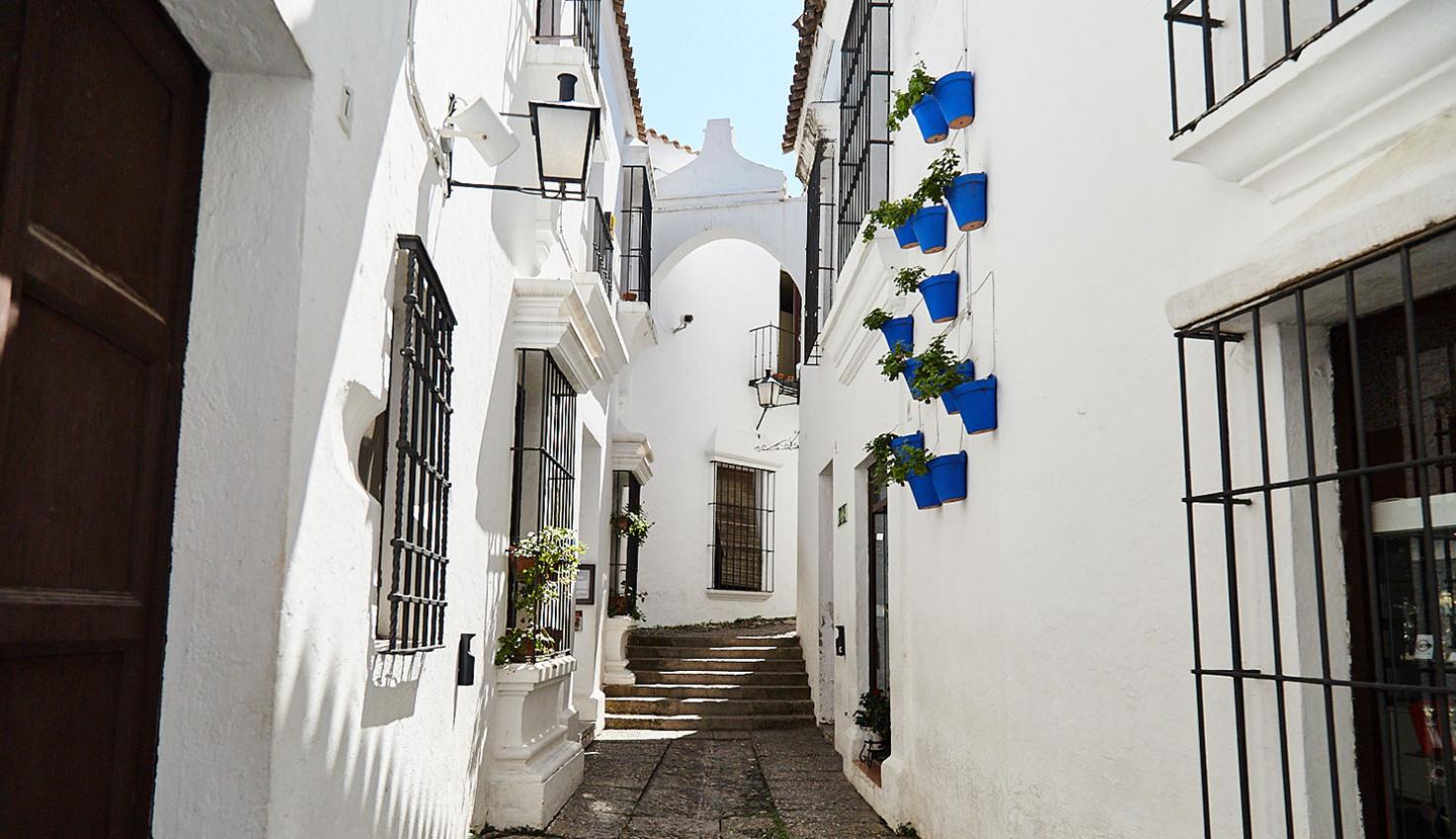 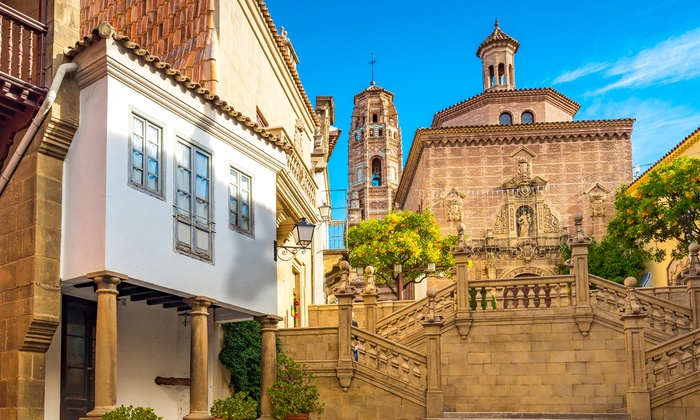